We live in a time when majoritarian politics is at its worst, when the politicians of this country, whilst masquerading as leaders, have succeeded in doing what Malcolm X warned the world about. "If you're not careful, the newspapers will have you hating the people who are being oppressed, and loving the people who are doing the oppressing."

This democracy of our country works on a few key factors, namely religion, race, caste, sex or place of birth. Exactly what Article 15 of our constitution stands against. Lets just extend the list just to make it fit for the century we're living in by including factors such as colour, sexual orientation and gender expression. These are the tools that our politicians today use to win over the uneducated and the 'educated illiterate' masses. They go north-east and claim helping Christians rather than Indians, they go to north-west and claim righting the wrongs faced by the majority at the hands of the minority, they go to the south and claim a  strong belief in liberal values, they go north and promise more money and they go to the two of the biggest states in the country and offer the majority population protection for their cows. Serve the majority by villainizing the minority and bingo you win the election. But you know, if you go into the origin of the term villain, it fits the situation quite well. The term 'villain' comes from a synonym of the word villager. So, you see, it fits the situation quite well. Villanize the backward and the poor and the majority middle-class will get right behind you.

So, what can we, the people, do to counter these majoritarian tactics being used by these politicians? Select better candidates? Mostly there aren't any. Voice our opinion? Trust me, the sheep are louder. The only options I can see is that we either somehow turn over the table or calmly educate the people around us. Each one of us who understands what the previous two paragraphs were talking about is surrounded by at least ten people who don't. So, educate them. Educate them not by denouncing their beliefs, asking them to substantiate beliefs with facts and getting frustrated, but by respecting their beliefs, understanding their beliefs and offering them a different point of view which doesn't necessarily shakes the foundations of their beliefs.

Since, Hindus are currently the benefactors of the majoritarian governance of the current central government, lets talk about tackling Hinduism. Between Hinduism, Islam and Christianity, offering a counter view of belief with respect to the hinduism is the easiest. This is because of the sole reason that there is no single book which defines the dos and don'ts. Despite popular belief, the Bhagwad Gita, unlike the Quran and the Bible, is just one of the sacred texts of Hinduism. There is Ramayana, Mahabharata, Vedas, Puranas, Upanishads and so many more. There is so much information regarding the religion within these texts, that almost no one reads, interprets and understands them all. If you choose to overlook the misogyny and dishonesty of Rama, the betrayal of Vibhishana and the honour of Ravana, its your problem. You are interpreting what you want to interpret and not what the texts essentially is conveying. In Mahabharata, if you choose to ignore the gender fluidity of characters, the plausibility of a polygamous queen, the strength of Draupadi, and the sheer shamelessness of Krishna then it is your problem. The texts are there. The moral code they preach is right there. Compare. Understand. See what they actually say for yourselves and not what the politicians like Yogi and godmen like Yogi say.


What makes a nation? Or more specifically what makes India a nation? What is that one thing that binds us, the people, together? Is it a common tongue like French which united the people of France, or is it a set of ideals and values that are prevalent among the United States of America?

When French was made the national language of France, the country lost its rich linguistic diversity as countless other languages faded into oblivion. Is this what we want? Sacrificing our cultural identity for a national one? With values and ideals closely linked with religion and culture, is it even possible to have a single set in a country as diverse as ours? What do we do when some worship an animal, the others love to eat, or when some condemn what others depend on?

So, since it’s clearly not a language or a set of values that binds the people of India together, then what is it? What could a people constituting the descendants of the subjects of the Mauryans, the Guptas, the Sultanate, the Palas, the Pandyas, and the Mughals have in common? That’s right. Their colonial past. This country united under the East India Company and its people are defined by the liberation from it. That is what gave us a national identity. We are the people who resisted the British. 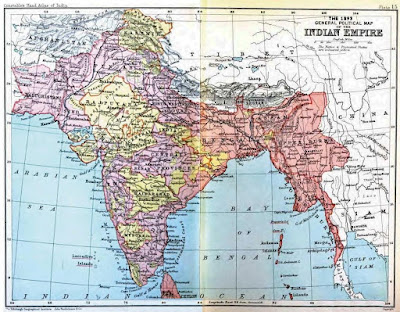 Maybe the memory fades because the Crown left the country in the hands of the INC instead of being driven away by people like Bose and Singh. But it is high time that we remember. Either remember our colonial past or find something else that defines this culturally diverse nation of ours, because it sure as hell isn’t Hindi, Hindu or Hindutva.